Okay, it is pretty much impossible to select four of the books out of all the many, many of the many books. I’m not even sure about the choices highlighted below. I am picking books that you may not have read, to encourage you to read them, rather than picking the astonishing books that you are almost guaranteed to have read (To Kill a Mockingbird, 1984, The Catcher in the Rye, A Christmas Carol, etc. etc.). Also I choose them not because they are brilliant (which they are) but because they had a big impact on me and left their imprint on my psyche. This post took the longest to write of any of this series, and I think it’s the shortest one, too.

I am not much of a reviewer. I am unable to do justice to the kind of work that gets poured into writing a book, so forgive me if my language is inadequate. Disgrace takes an unflinching view of post-apartheid South Africa through the lens of the broken foolishness of David Lurie, a disgraced college professor. David is a white man, a group which though still dominant, is seen to be floundering. Disgrace explores in its way what it means to be human in the context of personal suffering and a wounded society. I read this in 2004 and it was both an education and a deep shock to me. Recommend. In this light treatment of love, Jackers takes us on a matter-of-fact exploration of the subject from a Christian philosophical perspective, examining storge, phileo, eros and agape. It was adapted from a series of controversial radio discussions in 1958, where it was criticised in the US for being too forthright about sexual matters, which seems pretty funny now. It’s lovely. I first read it when I was eighteen and it sparked my interest in phileo proper. A few years later I went on to write a long paper on the subject. Ultimately I am not in full agreement with Lewis on friendship, because he defines it in essence as characterised by pleasure – interest in a common subject (for example). I would consider that a lesser kind of friendship to a friendship characterised by virtue, which of course encompasses pleasure as one of its components. Beautiful book; worth reading.

I received this as a gift in, I think, 2001. At the time I had not heard of Lawson and had not yet seen any of the television programmes that have made her so famous. This is more than a cookbook: it is a manifesto on appreciating food for the good life. Not all of the recipes I have tried from it were successful: that could be my failure (and I’m sure is, in some cases) but I have a feeling that Lawson is an instinctive cook, and that she may work backwards in trying to calculate what she has put into a dish. A less instinctive cook, following her advice to the letter, might find that in fact they do not produce as good a result. Since becoming a much better cook myself in the last five years, the recipes of hers that I have tried have improved, as I have cooked more instinctively myself. But saying that, she is a beautiful writer and her gusto for food and pleasure are very infectious. I also really enjoy her confidence – one of her key principles is that it is better to serve a lot of a small number of things (for example a mound of rice, a mound of greens and a good piece of meat) than to serve small amounts of loads of things. I have found this such an effective and appealing principle in cooking for others. It only fails in the presence of picky eaters, and there are one or two of those in my life. I remember one day serving up a bright and flavoursome fish dish with steamed green vegetables and buttered potatoes to a group of eight. I was gutted to see that one woman at the table only ate a couple of plain boiled potatoes. But hey, you can’t please ’em all. It is not so much a recipe book as a thumping good treatise on, as she so so beautifully puts it, the pleasures and principles of good food. A keeper for every cook.

And now for the obvious one. 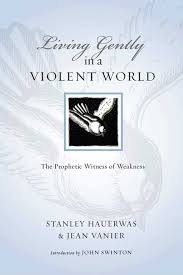 Living Gently in a Violent World – The Prophetic Wisdom of Weakness, by Stanley Hauerwas and Jean Vanier, two of my spiritual, moral and intellectual heroes. I didn’t know at all what to choose for my fourth book. I himmed and hawed and hesitated over it. I asked the Husband Unit what he thought had been one of the most influential books on me that I had read, as far as he could see it. Without even looking up, he said, “Living Gently in a Violent World.” Eh, duh. That’s the name of the blog and it hadn’t even crossed my mind. So here you go.

This book is comprised of four essays that were presented at a conference organised by the Center for Spirituality, Health and Disability at…the University of Aberdeen. I actually only recently found that out.

This book punched me in the heart. I’m not going to say anything about it, I am just going to give you three quotes from it and say once again – if you have not read this, you ought to.

“In a world determined to cure those who cannot be cured, Christians should refuse to do anything other than be with those Jesus taught us to be loved by – that is, those we ‘help’ by simply being present.” – Vanier, p. 56

“Today in France they are saying that within a few years there will be no more children with Down syndrome because they will all have been aborted…. The heart of L’Arche is to say to people, ‘I am glad you exist.’ And the proof that we are glad that they exist is that we stay with them for a long time. We are together, we can have fun together. ‘I am glad you exist’ is translated into physical presence.” – Vanier, p. 69

Posted by the chip monk